You are here: Home » Blog » Oracle

What is Oracle database (RDBMS)?

The company was founded in 1977 by Lawrence Ellison, Bob Miner and Ed Oates with initial capital of 1400 US Dollars. At the beginning the company was called Software Development Laboratories (SDL), later Relational Software, Inc. And only in 1983 the name was changed to Oracle Corporation in favour of its most successful product Oracle RDBMS (at that time there was already database version 3).

The name Oracle comes from the code name of a CIA project where Larry Ellison worked. After some time the project was stopped,  then Larry decided to start his own business using obviously similar name.

The origin of RDBMS idea

The idea about a relational database came to Ellison in 1972 from an article of Edgar Codd who worked in research laboratory of IBM at that time. The management of IBM did not realize a commercial benefit of such software at that time. In return, Oracle took an advantage of that idea and was the first company who presented the first commercially usable product on the market.

First RDBMS version released in 1979 was called Oracle V2. Why not V1? END_OF_DOCUMENT_TOKEN_TO_BE_REPLACED 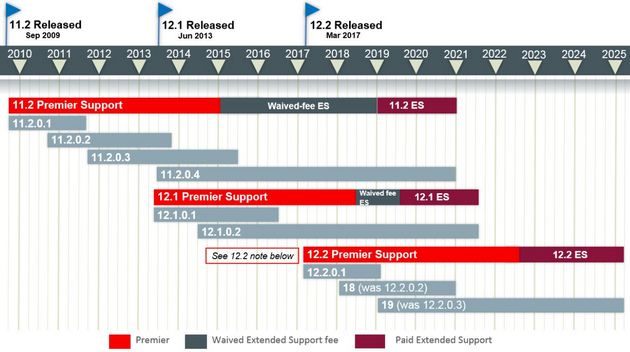 END_OF_DOCUMENT_TOKEN_TO_BE_REPLACED

Column-Oriented Databases vs RDBMS and Oracle

This is the second part of my article about Column-Store databases. In the first part Column-Oriented Databases – Old Idea, New wave I was focusing on topics like performance and functionality of Column-Oriented Databases and their comparison to RDBMS, specifically to Oracle database. This time I will continue the comparison of two database camps – Column-Stores vs Row-Stores – in areas of compression, partitioning. I’ll mention also the usage of Column-oriented storage benefits in Oracle products, like for example a new Oracle 12c database In-Memory Option.

Compression of columns vs rows

One of the potential advantages of column-oriented storage is the possibility of good compression. It is important to understand why compressing the data can be advantageous. It is not primarily the pure cost of having enough disk space to cover the physical size of the data that matters – disks are relatively cheap and are getting larger and cheaper at a steady rate. Rather, the potential benefit is when data has to be retrieved from disk as part of processing queries. Good I/O bandwidth is not cheap and techniques, such as compression, that reduce the size of the data that is retrieved from storage can be very advantageous, although there is usually some CPU-cost associated with compressing and uncompressing the data.

Oracle for example provides several major mechanisms for utilizing compression to benefit query processing. One is the row-level objects compression feature; another is Exadata Hybrid Columnar Compression – HCC (see below).

Column-oriented storage is a form of vertical partitioning of the data. One of the disadvantages of this type of partitioning is END_OF_DOCUMENT_TOKEN_TO_BE_REPLACED

A second observation is that the often benchmarks against Column-Stores do not test joins. END_OF_DOCUMENT_TOKEN_TO_BE_REPLACED