With a new Oracle 12c database release Oracle is going to come up in 2013 with a fundamentally new architecture called Pluggable Database that will greatly help enterprises in data and database consolidation as well in building a foundation for Private Database Clouds. Traditionally Oracle had several databases for several applications. Oracle 12c database will enhance its consolidation ability and will allow multiple customers data to coexist in a single database. Since 12c will be released pretty soon, I’d like to share some details on 12c Pluggable Database feature.

With 12c Pluggable Database feature Oracle will introduce a notion of a container database (CDB). This container will hold some number of Pluggable databases (PDB). So, as a result you will have one dedicated database instance (or several ones in case of Oracle RAC) and you will be able to create or plug multiple private databases into this single container. RDBMS will be responsible for keeping those databases separate, private and secure. Pluggable Databases should be more efficient in terms of resource consumption, scalability and manageability (see the Oracle comparison graph) compared to a single database. Based on Oracle show case, it will consume 6 times less hardware resources and will be 5 times more scalable. One can backup all of PDBs at once and will be able to restore any of them at any time. This new technology will be transparent to applications and all Oracle database features should work for Pluggable Private databases. 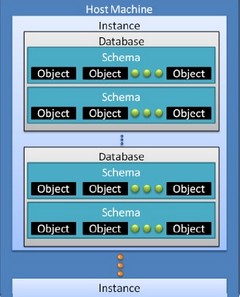 At Oracle Open World 2012 in San Francisco some folks said 12c Pluggable Database feature would be a revolution architecture change. And in a way it’s true, but only in the Oracle world. I think that Oracle is just catching up in this case with Microsoft SQL Server which has been demonstrating the value of its private database concept in practice for decades. The following figure shows the encapsulation of instances, databases, schemas, and objects in SQL Server 2005, but I remember that private databases concept was already present in version 2000.

But let’s come back to our Oracle 12c Pluggable Databases…

– Consolidate many PDBs onto a single platform.

– Fast provisioning of a new PDB or of a clone of an existing PDB;

– Fast redeployment, by unplug and plug, of an existing database to a new platform

– Separation of the duties of the application administrators of these PDBs

– PDB is backwards compatible with an ordinary pre-12.1 database;

– A session sees only the single PDB it connects to

– You can clone a PDB, both within the same CDB or from one CDB to another one

– The operations on PDBs as entities (creating, unplugging, plugging in, cloning, dropping, and setting the Open_Mode) are implemented as SQL statements

– Pluggable Databases functionality is fully interoperable with all the database options

– All PDBs can be backed up at once, but recovered separately