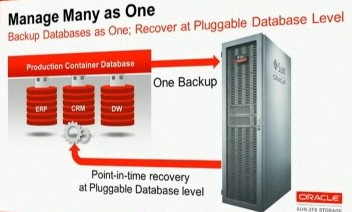 There are several questions on Oracle 12c Pluggable Database feature came up on my presentation at the German Oracle User Group (DOAG) regional meeting and from other users. Some of them I’ll clarify in this article.

Can Point-In-Time recovery be conducted at Pluggable Database (PDB) level?

Yes, it will be possible.

Can database services be created inside a Pluggable Database (PDB)?

Of course you can have many services within a PDB. Each will denote the PDB within which it is defined as the initial current container. Use the normal methods to create, maintain, and drop additional services in a PDB. A PDB’s default service must not be dropped. Of course, service names should be unique across all the databases that are registered with a particular listener.

Can I have local TEMPORARY tablespace at Pluggable Database (PDB) level?

In spite, during the PDB creation only SYSTEM and SYSAUX tablespaces created, you can create local temporary tablespace later for every PDB. UNDO tablespace can NOT be local and stays on the CDB level.

Is conventional database mode will be still available in 12c database and later versions?

Yes, on Oracle 12c you will have two options of creating a usual old-fashioned Oracle database (non-CDB) or creating a Container Database (CDB) that will hold all your Pluggable Databases (PDB) that you will create or plug later. However, based on my information non-CDB mode will be available only in 12c release 1 for compatibility reasons and will be discontinued in 12cR2.

Will Oracle 12c database have only one container?

or verify current container with below SQL:

Is cloning a PDB from one in a different CDB supported?

I have not seen it in 12c Beta 2, but Oracle intends to support it in the final version. You’ll identify the source CDB by creating a database link to it from the CDB in which you will create the clone.

Not in 12c Beta2, but Oracle intents to remove this restriction in the final version by using the same approach that allows online RMAN backup: by re-constructing any blocks that change during the time it takes to copy the source PDB’s datafiles.

Not sure why, but in final 12c release it will be possible to go from any one Open_Mode/Restricted combination to another with a single use of the alter pluggable database statement.

Will it be possible to allocate/restrict resources (CPU/Memory) of PDB’s (Pluggable)?

Yes, it will be possible using new functionality of Oracle 12c Resource Manager.

Using 12c Resource manager you will be able control CPU, Exadata I/O, sessions and parallel servers. A new 12c CDB Resource Manager Plan will use so-called “Shares” (resource allocations) to specify how CPU is distributed between PDBs. A CDB Resource Manager Plan also can use “utilization limits” to limit the CPU usage for a PDB. With a default directive, you do not need to modify the resource plan for each PDB plug and unplug. However I’m not aware of a possibility to restrict memory of PDBs, since they will share one single SGA.