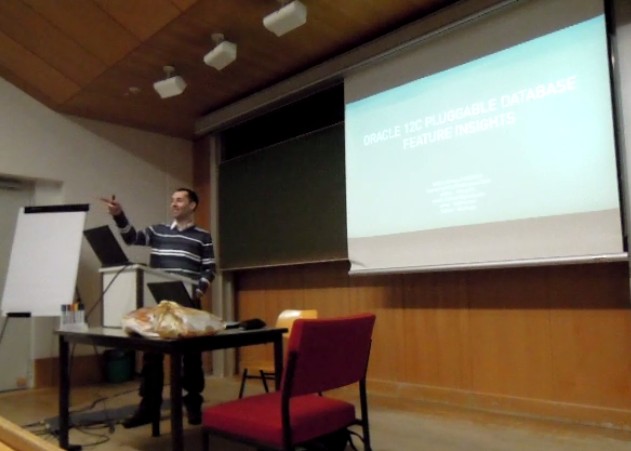 My presentation of Oracle 12c Pluggable Database feature at DOAG

Last week I gave a presentation called “12c Pluggable Database Feature Insights”at the German Oracle User Group (DOAG) regional meeting in Nuremberg. Not only the presentation itself but also a later discussion was very interesting and valuable. I encourage my nearby German colleagues joining DOAG and visiting regular Regional DOAG meetings in Nuremberg.

1. Connect to target Container Database in my case cdb2 located in /u01/app/oracle/oradata/cdb2

2. Then, make sure that the to-be-plugged-in PDB is compatible with the new host Container Database

If case of incompatibility issues the procedure will throw an error

3. Now plug it in. The using SQL keyword must be followed by the full path for the PDB manifest, a.k.a. the .xml file, generated by the previous unplug operation.

Create a PDB as a clone of an unplugged PDB

This example suggests the idea of maintaining a collection of PDB “gold images”, as unplugged PDBs. There are many use cases, for example:

• in a development shop to allow developers and testers rapidly, and repeatedly, to provision a well-known starting state

• to provide a new way to deliver a brand-new application

The as clone SQL clause ensures that the new PDB gets a proper globally unique identifier.
After that you can see your GUIDs:

Note: The DBA_PDBs.GUID travels with a PDB as it is unplugged from one CDB and later plugged into another. The server code can enforced uniqueness within a CDB, but not across CDBs.

I’ll show you here how you can establish your pre-12.1 database as a PDB. Overall you have several methods to accomplish that:

Since first two methods are the standard once, I’ll only describe the last one below.

Notice that there is no single upgrade step that takes you there from here. It’s a two-stage operation: first you upgrade your existing database into a 12.1 non-CDB; then you adopt the non-CDB as a PDB into a pre-existing CDB — simply by plugging it and then doing a single post-plug-in step.

2. Second step, connected to noncdb, is to generate the manifest file, just as you do as part of unplugging a PDB:

3. The next step is to connect to the adopting CDB, cdb2 and to plug in the datafiles of noncdb using its manifest file.

4. Now open it, to finalize the plug-in, close it, and re-open it, setting its Restricted status to YES:

5. Finally, run an Oracle-supplied SQL*Plus script to remove data from what will now be a local data dictionary, because, in the new regime, the metadata that defines the Oracle-system is, held once for the entire CDB.

6. As a last step, open the newly-adopted, former non-CDB

That’s it for now for Oracle 12c Pluggable Database feature… and I expect Oracle database 12c to be released already in March this year.