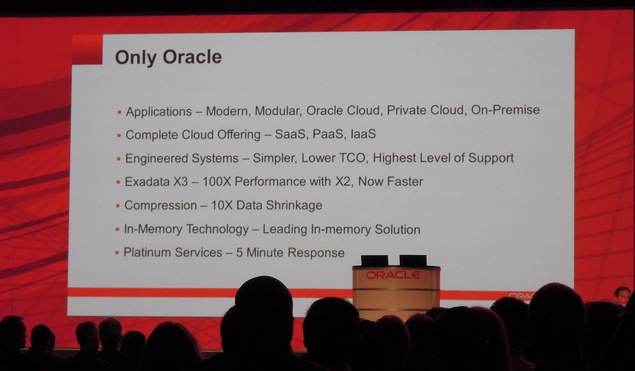 Read below is the second part of Oracle OpenWorld 2012 Wrap Up. It’s about OEM Cloud Control, Unstructured data, Database Consolidation and some other topics.

Below are some improvements of 12c Cloud Control Release 2 compared to R1:

I think this topic was one of the main interests at the OOW conference. For decades, companies have been making business decisions based on transactional data stored in relational databases. Beyond that critical data, however, is a potential treasure trove of non-traditional, less structured data: weblogs, social media, email, sensors, and photographs that can be mined for useful information. You can say it’s everything else, than structural data which is usually NOT stored in a repository like a database with rules governing data types, values, etc. Often, this data is simply ignored or forgotten about when it is no longer needed. Roughly 80 % of all corporate data is unstructured, according to Gartner.  It’s also known as Big Data.

Decreases in the cost of both storage and compute power have made it feasible to collect this data – which would have been thrown away only a few years ago. But to derive real business value from Big Data, you need the right tools to capture and organize a wide variety of data types from different sources, and to be able to easily analyze it within the context of all your enterprise data.

In this respect Oracle presented another Engineered System for unstructured data management called Big Data Appliance. Some details about the machine are below.

Use Spunk to make your data accessible, usable and valuable across the enterprise.

Another interesting demo I saw during OOW was from a company called Splunk. Splunk is  professional and I would say unique log server software that collects, indexes and harnesses the massive volumes of instructed machine data generated by your IT infrastructure – physical, virtual and in the cloud. From what I’ve seen, the software is unique, extremely fast and provides comprehensive capabilities in terms of detecting the data patterns, threads and failures in any kind of source information, providing analytics and alerting on the top. With Splunk for example you can troubleshoot problems and investigate security incidents in minutes and monitor your end-to-end infrastructure to avoid service degradation or outages. It has central Web-based console with robust authentication mechanism that can split rights, roles and responsibilities between different users inside the tool. You can download and use it for free up to a certain data volume limit.

Presenting Oracle database 12c and focusing on its Pluggable Databases feature, Larry Ellison pointed out, that in consolidation cases, saving the overhead for processes and memory structures give the product an advantage over competitors. This new feature of 12c database, when multiple Pluggable Databases sharing a container dataset (CDB), provides a main improvement in database consolidation. On 12c you will be able easily plug, unplug and clone private databases (PBD) inside a Container Database (CDB) or between those.

Based on this new technology some other database parts like Oracle Resource Manager will bring more value into database consolidation topic. With oracle Resource Manager 12c you can create CDB Resource Plans to manage resources across your PBDs. For example, a CDB resource plan uses “shares” to specify how CPU is distributed between PBDs.

This was my point of interest that I do not have time unfortunately to cover in details at the moment. Maybe will do in the next posts. But only saying that I had an opportunity to chat with some well-known Oracle gurus like Tome Kyte, Jonathan Lewis, Kyle Hailey and some others that tell me it was worth to be there.

Actually I learned that sunny sky is not usual in San Francisco due to a fog that blankets the city in the summer when hot inland temperatures create a low-pressure zone over Northern California’s Central Valley. The next phrase only confirms that:

“The coldest Winter I ever seen was a Summer in San Francisco.” – Mark Twain.

Anyway the city is very nice, but I tried focusing on Oracle technology during the OOW conference doing also some networking 🙂