You are here: Home » Blog » Oracle » What is Oracle database (RDBMS)?
← Previous article Next article→

What is Oracle database (RDBMS)?

The company was founded in 1977 by Lawrence Ellison, Bob Miner and Ed Oates with initial capital of 1400 US Dollars. At the beginning the company was called Software Development Laboratories (SDL), later Relational Software, Inc. And only in 1983 the name was changed to Oracle Corporation in favour of its most successful product Oracle RDBMS (at that time there was already database version 3).

The name Oracle comes from the code name of a CIA project where Larry Ellison worked. After some time the project was stopped,  then Larry decided to start his own business using obviously similar name.

The origin of RDBMS idea

The idea about a relational database came to Ellison in 1972 from an article of Edgar Codd who worked in research laboratory of IBM at that time. The management of IBM did not realize a commercial benefit of such software at that time. In return, Oracle took an advantage of that idea and was the first company who presented the first commercially usable product on the market.

First RDBMS version released in 1979 was called Oracle V2. Why not V1? There were two reasons for that: a concern that a version 1 would not awake potential customers’ interest and to show a pseudo- leadership compared to the competitors.
First version of RDBMS was created with assembler. Later it turned out that assembler was costly and inefficient. Later Pascal and Ada were considered as programming languages but the choice was made on “C” that only started gathering strength at that time. Another benefit of C was the lower license costs.

Over the last 35 years Oracle went through successful database release schedule. At the moment the actual version of Oracle database server is 12.2 that includes the following marquee features:

and in 2018 Oracle is going to bring on the market its newest fully autonomous database version 18c, which was announced at the Oracle Open World 2017 Conference.

Read my another post on the detailed Roadmap of Oracle database releases.

Oracle is a leader in database competition

Oracle was, is and probably will be the leading worldwide relational database management system (RDBMS). The below graph represents the RDBMS software revenue of the leading companies and confirms that Oracle continues have largest RDBMS market share with more than double sales of nearest competitor based on Gartner Research from March 2016: “Market Share: All Software Markets, Worldwide 2015”. 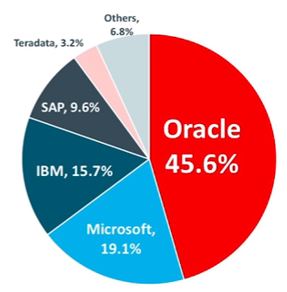 Just have a look below at the high level architecture of the latest Oracle database version 12c. 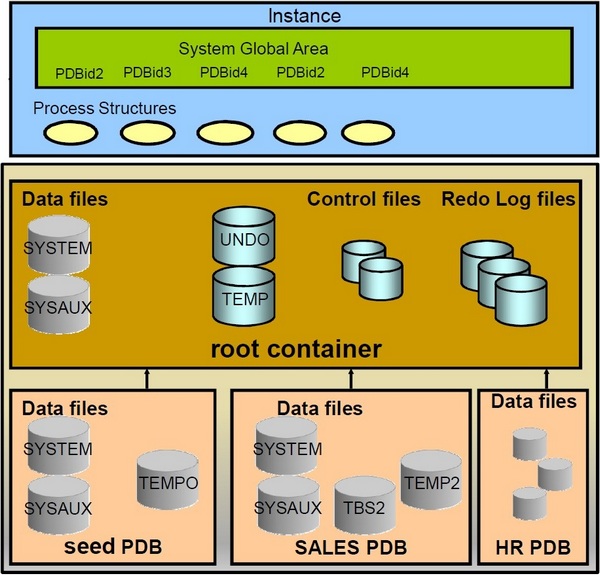 Why you prefer Oracle database

– Oracle is a database technology leader. Many of the new RDBMS things come from Oracle first.

– Oracle is very reliable database that can cope with huge database sizes and massive application workloads. And I can tell you it’s not an easy work for a complex peace of software.

– Oracle database is portable and available on different OS platforms including the same code base and documentation set.

– Oracle demonstrates the world’s fastest RDBMS performance on different platforms. Oracle database performance tuning is a big and interesting topic to discover though.

– Oracle database a comprehensive software product with many tools, utilities and abilities that come along with the server. It has so many interesting things to learn!

– You can download Oracle database and play with it for free

– but the main point I always mention: It simply works! And it works pretty well for most of general purpose database use cases.

– A well-known test database user called SCOTT was taken from the name of the first employee of Oracle Corp.
– …

I encourage my readers sharing the reasons of why you like Oracle database and interesting facts about Oracle RDBMS that I will include in this article.

One Response to “What is Oracle database (RDBMS)?”